Skip to content
I came across this review by Jonathan Jones in the Guardian yesterday, I think its a brilliant piece of writing but then I would do.
Click here to see comments on Jonathan’s article>>>

BP Portrait Award 2011: The shock of the old

Out of all 2,372 entries in this year’s BP Portrait Award, it is Louis Smith’s retro-academic soft-porn fantasy, Holly, that stands out. 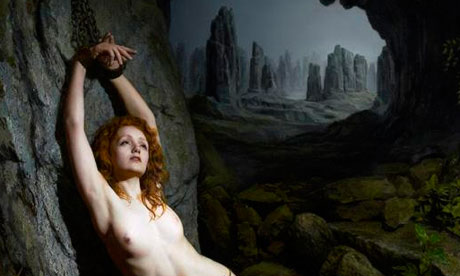 Provocative … Holly, by Louis Smith, which is at the National Portrait Gallery from 16 June. Photograph: Louis Smith/PA

Louis Smith’s Holly, a painting of a model chained to a rock that is 8ft-high as a canvas and quite a bit taller when you see it in the gold altarpiece he has built to hold his hymn to the object of his desires, is by far the most memorable thing on the short list for this year’s BP Portrait Award at the National Portrait Gallery. I can say this because I am a judge of this year’s prize, and after looking at all 2,372 entries, this was the only one that stayed with me.

Is it a kitsch resurrection of 19th-century academic art, a grotesque soft-porn fantasy, or something you might expect to see on a heavy metal album cover? It can legitimately be called all that, and more. The jury argued frenetically over this one painting but I wonder why my opponents failed to point out that it is the kind of painting Adolf Hitler might have loved. A nude, an eagle, a mountain vista – all that would have gone down great at Berchtesgaden.

Call me a fascist because I like it. Smith is from Manchester; this massive painting was ferried from his Manchester studio to the east London warehouse where we did the judging. I kept thinking of the film Control, about Manchester music legends Joy Division. Asked why they use Nazi references, they mutter: “It’s provocative, isn’t it.” In fact, Smith is calling up far more respectable influences than Hitler – there are direct quotations from Caravaggio’s painting, John the Baptist, and Leonardo da Vinci’s Virgin of the Rocks. Beyond such echoes Holly is blatantly posed like the 21st-century model she is, and there’s something sleazy about it all.

The jury first saw the painting covered with a sheet. Even like that it drew all eyes to its grandiose frame. Who on earth has sent this in, what could it be? We assumed it would be fairly lunatic and, in a way, it was. But photographs do not really reveal what made some of us think twice: the technical brilliance and astounding details of the painting. It is true that Smith has created the kind of fantasia that might have been painted by a 19th-century nudemonger such as Gérôme. But it is also true that he has acquired the skills to do so. He has trained himself to paint like the old masters, and used that skill simply to pleasure himself. There is surely an analogy here with Damien Hirst’s decision to abandon conceptual art and try to paint – Hirst has been mocked, but did he sense a new mood in art, a moment when retro-academic painting becomes the new outrageous?

The jury never reached consensus about this painting. But it would have been censorship to deny it a place on the short list. Everyone deserves to share in the fun it gave us, including that of fierce debate. The first time I saw it in the flesh, so to speak, I said, “Jesus Christ”. The second time, I reacted in much the same way. Maybe, in our sophisticated times, the only work that can still shock us is a 19th-century oil painting that worships the artist’s idea of beauty.